Hangzhou is renowned as China’s “paradise on earth” owing to its beautifully crafted landscape. West Lake was created after the Chinese love for garden-style parks for recreation.

West Lake is a place of tranquility where urbanity becomes a silhouette on the northeast horizon and mountains near and far surround it on the other three sides. The occasional pagoda and Chinese-style arched bridge add atmosphere to the tree-lined walkways, verdant islands, and hills.

West Lake is quite a big lake and you can see different classic scenes from different locations. Long ago people named the Ten Scenes of West Lake and Emperor Qianlong marked each with a four-character inscription 200 years ago. Every scene has its own iconic features. 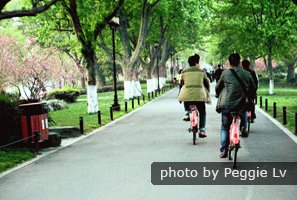 Spring Dawn at Su Causeway tops the list of the ten best known scenes in Hangzhou for beauty. When spring comes, the whole causeway is blanketed by peach blossoms and weeping willow catkins, creating an especially charming scene.

The causeway was built during the Northern Song Dynasty by Su Dongpo (1037–1101), a great scholar and famous poet, and was named after him. Stretching 2.8 kilometers (1.7 miles), it includes six bridges and is heavily sheltered by green vegetation.

2. Lotus in the Breeze at Crooked Courtyard 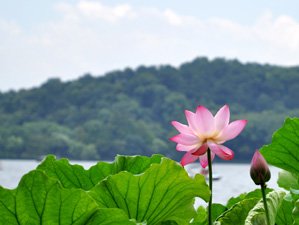 This was a “scene of scents”. Crooked Courtyard was the location of a winery, and the scent of lotus flowers and wine, to which was added the scent of the cool breeze from the lake, was said to be positively intoxicating.

Though the winery is no more, the cool evening breeze from the lake still blows and the lotus plants still thrive along the shores of Crooked Courtyard, which has been converted into a public park. 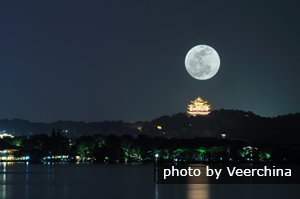 This scene is seen from the western end of Bai Causeway. In the 1½-acre (0.6 ha) garden there, plants and flowers intermingle with pavilions and platforms.

The teahouse with its cement terrace, bounded on three sides by water, became one of the traditional places to view West Lake, especially on Mid-Autumn night when the moon is full and bright. So its view was named “Autumn Moon on Calm Lake”. 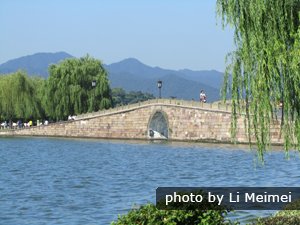 The most romantic, in origin, of the ten scenic sights is surely Melting Snow on Broken Bridge. According to “The Legend of the White Snake”, Broken Bridge is the site where two lovers met and fell madly in love. The beautiful maiden was actually a white snake.

Broken Bridge is not really broken, but is a traditional arched stone bridge. Snow melts on the north side of the bridge first, as the south side is in shade, giving the bridge a split image. Viewed from a distance, it looks as if one half of the bridge has been ripped off, since the snowy side blends perfectly in with the surrounding landscape (hence the bridge’s name).

5. Listening to Orioles Singing in the Willows 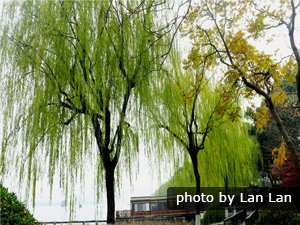 This sight is on the southeast of West Lake. During the Southern Song Dynasty (1127–1279) an imperial garden— was built on this site. It featured especially weeping willow trees — almost always the perfect complement to a waterscape.

The imperial garden has since become a public park, replete with pavilions, bridges and lawns, and of course the orioles still visit the willows, where they sing as beautifully as when the emperor came here to listen to their song. 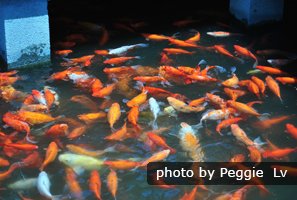 This is the scene of a popular leisure activity. It’s the best site to see and feed the fish of West Lake, at the southern end of Su Causeway. A stream flows from Huajia Hill to join West Lake there, and many flowers grow where the fresh water flows in, so it was called “Flowery Harbor”.

This area has been made into a 22-ha (54-acre) park with many varieties of trees and flowers, featuring a peony garden which blooms in April, and a goldfish pond which is the famous site for viewing fish. 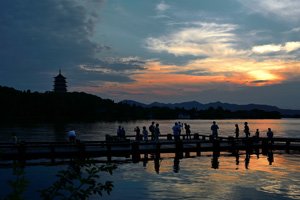 Most visitors to West Lake are so fascinated by the lake itself that they often don’t notice the surroundings.

Visitors are advised to also lift their gaze from the lake’s surface and behold the view on the other side of the lake. There one is rewarded by the sight of two mountain peaks, five kilometers (three miles) north. On days with low-lying clouds or fog these two taller peaks pierce through the vapor.

This sight, like most of the other sights at West Lake, is to be enjoyed to its fullest under certain specific conditions.

Evening Bell Ringing at Nanping Mountain, as the name suggests, is to be enjoyed at dusk, when the sun slowly sets, its softened rays casting their multi-colored reflections on the surface of the lake. At this hour the huge bell of Jingxi Temple peals.

Its clear, forceful sound reverberates across the lake, amplified in the still evening air. It calls for humility and reminds Buddhists of their age-old religious heritage. Indeed, it reminds anyone who experiences this beautiful setting of his or her ultimate smallness. 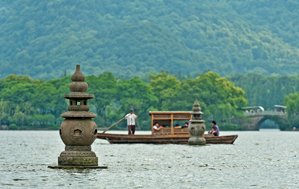 On the night of the Mid-Autumn Festival, when the moon shines full and bright in the sky, a candle is lit inside each of the pagodas. The light from the holes and the moon cast their reflections on the water, hence the name.

This scene is on the back of the one yuan bill, and so it is the most famous.